skip to main | skip to sidebar

I left my pump out Ina parking lot many years back at one of the HPV racing events. A friend of mine picked it up for me but we never had a chance to reunite. At least 3 years has gone by before I came across a replacement at a Walmart just last week.
Same color scheme too! 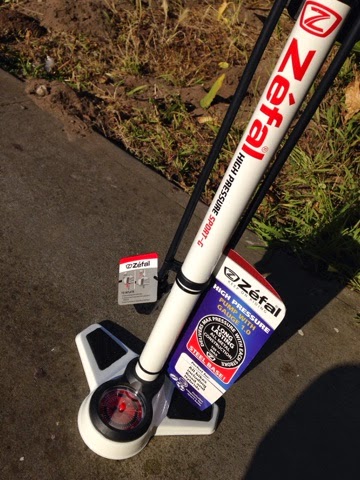 The guy at the cashier said, "That's a good one!" Wasn't sure if he was for real or if he was just trying to be friendly.
For $20, I tend to agree. As long as this thing performs decently, it'll be better than using my bike punted pump to get air into my wheels.
Can't wait till I get a chance to actually use this.
Posted by KMXTornado at 2:03 AM 1 comment:

Riding with the Wife

She tagged along! Not only that, but it was her idea to ride trikes yesterday! I've alway wanted to take her down that hill through Golden Gate Park and this time she did it! Too bad she was in front b/c I would've liked to see her trike grin as she sped through the wind.

It's a bit of a rarity to see other recumbent trikers in the City, but we found a couple riding their Greenspeeds! Since they were heading in the opposite direction, we only waved hello and continued on our way. Coming back though, we saw them again and pulled over to have a chat. I think his name was Russel.

In the middle of the conversation a cyclist rides by and shouts, "Can you guys pull over? You're in the bike lane!" He was wrong.

Nope, there wasn't a bike lane there at all. We were in the parking lane. No cars, but indeed it's a parking lane nonetheless. I see cars parked there all the time. I'm all about bike lanes and pushing for safety, but like all the other freaks in the City, entitlement becomes a bit of an issue.
Posted by KMXTornado at 12:54 AM 3 comments:

She looked at a bit awkwardly but smiled as did I when I yelled it. I forgot the term, "bentrider" isn't that well known even amongst recumbent riders. It was her 3rd ride in three weeks. Her recumbent grin said it all. She was having a blast. So who is she?

I don't even know. 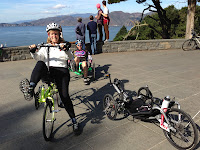 She was a stranger we met on a ride through the City. She and her road bike entourage were asking about trikes and their comparisons with a two-wheeler. Perhaps it doesn't occur to most riders that three wheels is an option.

As I rode earlier in the day, I yelled out to some parents and their kids sitting on a curb, "Three wheels are better!" A bit of an expected delayed reaction as they finally laughed at the irony that  I was actually complimenting their son who was also riding a trike.

This is my first published picture taken with my very first smart phone! Macs are beautiful. Photostream feature allows photos taken by iphone to be automatically pushed to my laptop. No need to even press a button. It just does it automatically. This means I don't have to pull out the SD card from my camera, insert it into my card reader, put the card reader into my laptop, hope it loads and drag the photo to some place on my computer for uploading later. I open up the folder and a few seconds later, it's loaded! I don't even have to press an "Import" button.

I'm always late to the party. I get Walkmans when people are buying CD players. I start listening to CD players when friends are sporting MP3 players. Finally, I got the iphone 5 about a month after its release and am almost all caught up with the technology that my counterparts have already been enjoying  for years.
Posted by KMXTornado at 11:29 PM 1 comment:

The trike's been sitting lonely for quite awhile. Can't wait to get back on it now that the weather's been improving.

On my recent trip to Los Angeles, I saw that they had closed one of their major arteries, Figueroa street to cars and it was pretty much translated to "bike day," with a few roller bladers and skateboards in the group.

How I wish I had the trike. Hadn't seen a single one and the estimate of the crowd is said to be just shy of 100,000 people! The density looked far from it. Maybe 2,000 would be my guess but maybe there were more present earlier in the day.

Posted by KMXTornado at 3:29 PM No comments:

I've recently had some interest in utility trikes and bikes and stumbled upon this the other day. 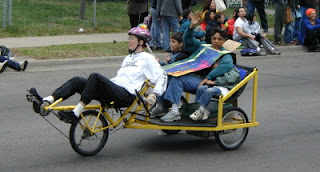 It sorta makes me want to have a family of 4. Two kids and the wife in back?

Posted by KMXTornado at 11:03 PM No comments:

I finally got my remote alarm! My original Ebay purchase went south and I ended up buying a new one from another seller.  $7.15 and 12 days later it was in my hands and it works perfectly! Batteries are included. It's pretty basic. Engage the alarm using a remote similar to ones for cars. When the alarm itself moves, it goes off and sounds like wild fire.

The thing's pretty sensitive so I'll definitely only be arming it outdoors. No arming my escoot in the library I guess.

BAD EBAY EXPERIENCE:
Payment for a remote bike alarm went to the ebay seller back on 5/23/12 and even today more than a quarter of a year later as of 9/21/12, I have yet to receive a working item. Don't buy remote alarms from a seller named bestnbestonline. You'll get an alarm and a remote that don't talk to each other. The numbers on the back won't match. The seller will be nice about it and send you not one, but two replacements which of course also don't work (despite warning them to test it first before shipping).

So with three duds, I finally make my final ultimatum: Refund me immediately or you get negative feedback. Looks like the joke's on me though b/c after 45 days, you can't leave feedback for sellers. The selling history is pretty much wiped out unless you look it up by ebay item number and even then, you still can't leave feedback.

I was surprised to learn that ebay now makes their customer service number public! I called it and they can't refund me right away b/c it's been more than 45 days. Luckily there's record that I've been having ongoing correspondence with the seller. Ebay's going to contact them to see if they can get me my refund. No case number yet.

The last time I opened a case for an ebay transaction? 5 years ago.

Posted by KMXTornado at 7:36 PM No comments:

I wrote about this awhile back. It's the Go-One velomobile. In all of the United States of America, there are 13. Yup, only thirteen in the entire country!

Recumbents in the news